The five oldies, as they are collectively known, were five elderly German Shepherds that were seized from a hoarding situation. The owner, who had previously managed to taken reasonable care of the dogs, had sadly had a stroke and was left unable to care for the dogs for a considerable period of time.

Hobo on his way to GSRRR

Sadly, due to misguided legislation and various bureaucratic and legal roundabouts, the rescue effort was halted and the dogs then had to spend six months in kennels. This unfortunately led to a further deterioration in their health as for whatever reason, many of their basic and medical needs continued to not be met. In our opinion, the dogs came out of these kennels considerably physically and mentally disheveled.

Bobby on his way to GSRRR

After rescue space was offered in 2013, all five of the dogs, now named Hobo, Donald, Bobby, Andy and Sasha, were taken to Glenn Veterinary Clinic. Every single one of them were diagnosed with various illnesses, including severe ear infections, tumors, cysts, eye infections and one with a severe skin infection. All of them had to have teeth removed due to extreme gum disease and all five were very underweight and all suffered from severe arthritis.

Andy on his way to GSRRR

All five dogs were given the medical care they so desperately needed over the next number of months. Andy, Sasha, Bobby and Donald remained at the rescue and Hobo was taken into foster care.

Don’s coat was so badly matted and he had such a bad skin condition that he had to be completely shaved.

All five of the oldies were eventually rehomed. Each of them went from strength to strength during their time of recovery.

Bobby died in 2014, not much longer after he found his forever home with the Hughes family, who showed him nothing but adoration and care and loved him greatly during the time that he was with them. 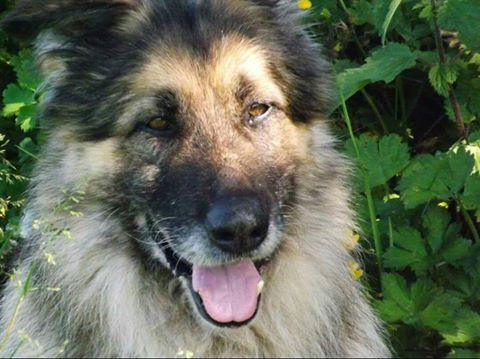 Hobo soon followed Bobby to the bridge. His journey ending at home with Charmayne, one of the people who was involved in his initial rescue.

Donald then passed in 2015 after spending his remaining years with Alexandra and David.

At the time of writing, only Sasha remains. Andy passed away in May 2017 and his ashes were scattered in our Garden of Peace at the kennel site.

Andy and Sasha with their mummy.

GSRRR is a non-funded, non-registered German Shepherd rescue that is based in Northern Ireland. While we are a breed specific rescue, we strive for the welfare of all dogs and our aim is to educate, rehabilitate and offer a helping hand to those in need. The purpose of this page is to help highlight the welfare crisis that is going on within the country and to showcase individual dogs that have come through, or are currently in, our care.
%d bloggers like this: