Lilys court case has taken place and George Hugh Richardson a livestock farmer from Randalstown pleaded guilty to causing unnecessary suffering and admitted that he did not take reasonable steps to ensure the needs of the dogs under his care were met. George Richardson received a lifetime ban on keeping dogs, but as he is a livestock farmer he is still free to keep other animals.

We’re hoping to get more information on this ruling over the next few days and Lilys page should (finally) be up.

Gus met a few more of the residents at the mad-house today. Contrary to what his face may be telling you in the above photograph, he actually seemed to enjoy the company. 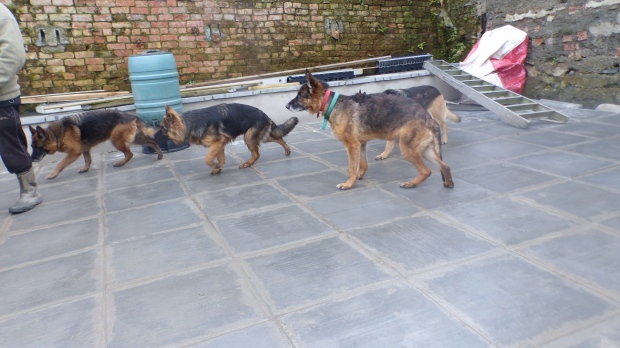 He showed a good bit more interest in other dogs than he has done on prior introductions. We even introduced him to two of our young males and while he tolerated them, he still appears to be very much a ladies man. 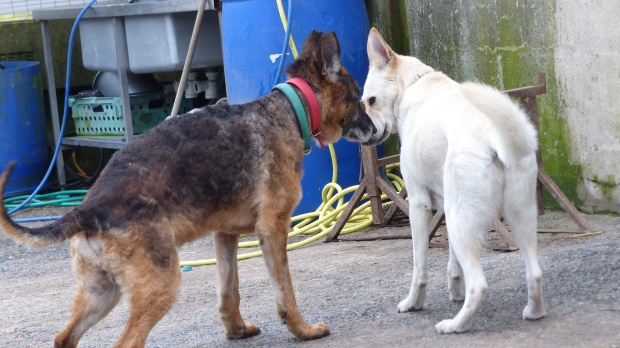 Chief always manages to find a ball. It doesn’t matter where he is. One will always appear.

Grampa Gus now also has enough fur on his back to partake in the grooming appointments that are readily available at GSRRR, and oh boy does he like a brush. 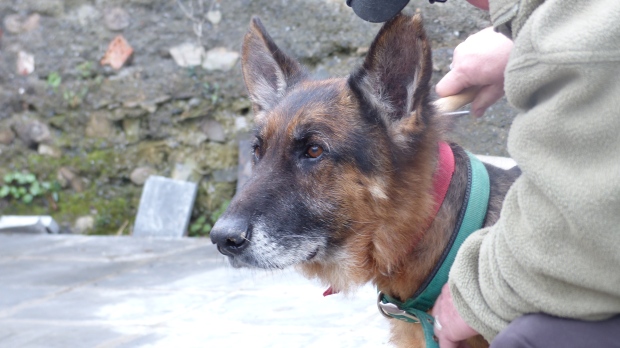 Making sure we get his best side.

What’s even better that his coat is beginning to act naturally and that he’s beginning to shed. As bizarre as referring to Shepherd shedding as good news is, this means that his coat is soon going to cycle back into the condition that it should be. Gus had to be completely shaved after animal welfare removed him from his abuser as his fur was completely matted and he had been left to lie in his own dirt. There was no other option for it. 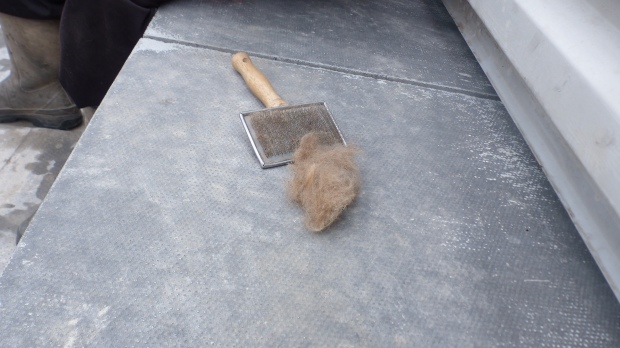 One tiny bundle of Shepherd.

Malnutrition and being completely shaved down like this generally doesn’t do great things for the fur, so any kind of natural mechanism after this kind of trauma is a wonderful sign. We’re hoping that in the next few weeks his coat will really start to grow back in and if the weather gets a wee bit warmer, we’ll be able to get him into the shower and give him a proper pamper.

The big guy has physically come on very well, his strength has improved and is able to lift his back paws fairly well and rarely losing his balance now. The weight gain is continuing to improve. Now to his mindset, this is a difficult one as his cognitive process is quite displaced and more than likely will never improve his attitude. With commands can be laboured at times and has shown to be non understanding of what is asked from him. We at GSRRR are coming to the acceptance that Gus will remain with us as with another few up at the rescue. With Gus its a pleasure to serve him and take care of him this boy like so many are discarded and thrown to the side as he and so so many others are no longer of use to the trade of financial gain. The slavery of this breed and so many sickens us to the core. In the animal kingdom they do not exploit or use or enslave and breed for trading with gain of financial exploitation I and all who are involved with GSRRR will continue to be the caretakers of all who come to us.

Gus’ ears have been severely damaged on more than one occasion.

Gus, 18/02/2017 – He had to be completely shaved as his fur was so matted nothing else could be done. He was extremely underweight and had so little muscle mass he had difficulty moving his back legs and keeping his balance. 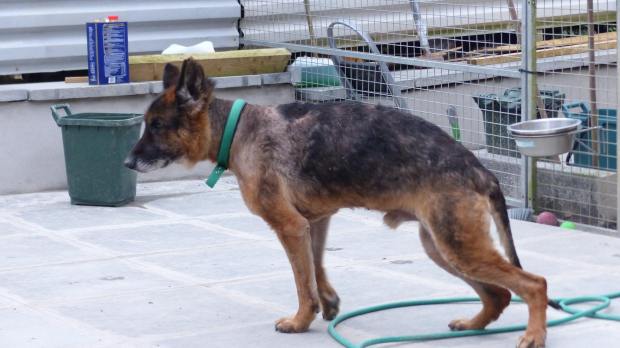 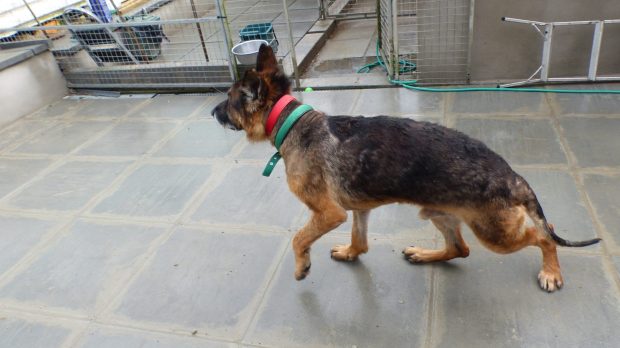 Gus 23/03/2017 – Fur is growing back well and he’s continuing to put on weight. He is now much steadier in the back legs and isn’t falling over as much. 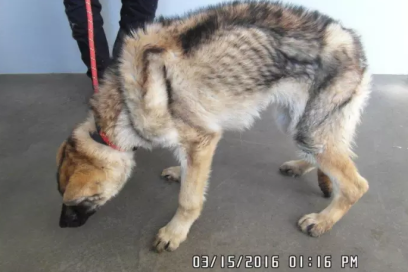 Shadow shortly after his rescue. 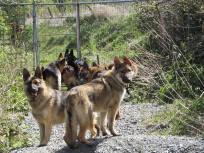 Shadow with us at the rescue.

Today at German Shepherds RRR we recieved wonderful news concerning one our dogs, Shadow. Shadow came to us in the spring of 2016 after he had been seized by the council as part of a cruelty case and today we have been informed that a conviction of a lifetime ban and a large fine has been enforced upon his previous owner by the courts.As we are all aware, this is big news in Northern Ireland and a great step forward for animal welfare within this country. Justice has been done for Shadow and we hope it is the start of a trend in how future cases will be dealt with.

At this time, we would like to thank all of our supporters, both within the general public and the councils, in this case, specifically Armagh City, Banbridge and Craigavon Borough Council. We are a small rescue that recieves no funding and it humbles us greatly to be asked and entrusted with the welfare and lives of dogs like Shadow. We would not be able to do what we do without the support that we recieve on a daily basis and because of this generosity and courtesy, dogs like Shadow are given a great second chance at life.

We would also like to extend a great thanks to Sam and Jamie for giving Shadow a home and we are happy to say it is a home in which he is thriving. His world is now so different from the world that he came from and is filled with love, happiness and a big sister called Storm.

GSRRR is a non-funded, non-registered German Shepherd rescue that is based in Northern Ireland. While we are a breed specific rescue, we strive for the welfare of all dogs and our aim is to educate, rehabilitate and offer a helping hand to those in need. The purpose of this page is to help highlight the welfare crisis that is going on within the country and to showcase individual dogs that have come through, or are currently in, our care.